Snow, Rain, Ice, Howling gales all the joys of winter have beem thrown at us.
It's now 2.25pm and it's nearly dark .
But it will soon be the shortest day so we will soon be having the longer days, but colder weather is yet to come.
Posted by The itinerant archer at 14:22 No comments:

Well different anyway.
For the first times in ages I've watched a Film, well three actually.
The first one was 'The World's Fastest Indian' with Anthony Hopkins I really enjoyed it a really good story.
The next was 'Into the Wild' a story taken from a book about a true story after all I had read about it I found it rather disappointing, but then it was mostly fiction as no one really knows the true story.
Then I watched a Film on TV called 'Erin Brockovich' this I really enjoyed .
So two out of three can't be bad.
So that's what I've been up to sat with my feet up watching film's so that's how the other half live ??????
Posted by The itinerant archer at 12:09 No comments: 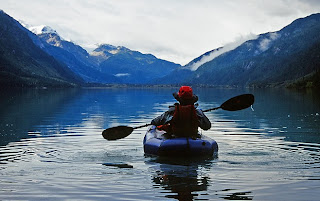 Wel it looks like Winter is here , dark, wet and cold.
So it's time to plan new adventures.
What do I do once I have sold the canoe and get a Packraft ??
I will be able to go to a lot more out of the way places than I did with the canoe.
Flash Earth is a good place to find some interesting places to go and along with a map and the information from the Geograph website I can get a good idea of what to expect before I get there.
I'm now going through my gear to see if there is anything I need??
I have found out I have a lot of camping gear that I never use, and more than likely I never will so maybe it's time to sell all the stuff that just lies there gathering dust as all I really need is a favourite and a spare.
The more I sell the more money I will have for packrafting adventures.

Can't remember where I found the picture above, but it makes me smile, so thank you to whoever took it.

Posted by The itinerant archer at 18:41 No comments: 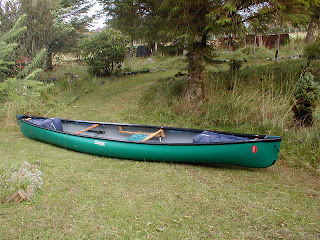 
Has Winter arrived it's suddenly turned cold ??
No cycling this Weekend it was cold and windy plus the tides were wrong for a Beach ride,
If you don't go at low tide the sea pushes you too far up the beach and into the soft sand and it just ends up being a long walk.
What a difference compared to last week.
Posted by The itinerant archer at 15:14 No comments: 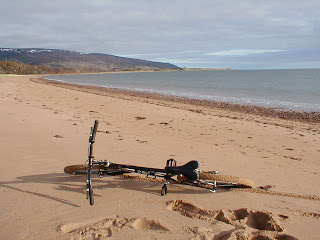 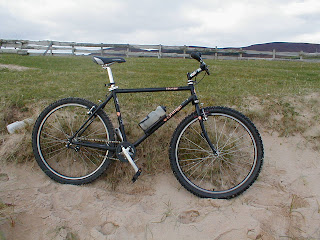 It was a lot warmer this morning so I took a run up the coast, there were only a few places you could not ride because of either soft sand or rocks.
The new Singlespeed setup faired well, but it was strange only having one gear and for some reason it all seemed easier than when using gears, maybe it's because it's a lot less complicated as you don't have to wonder if you are in the right gear, as the right gear is the only gear. 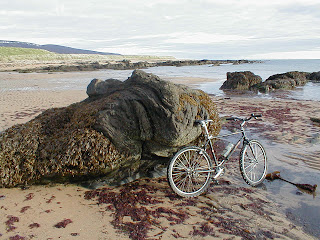 Saw this strange rock with it's twisted shape there is a lot of interesting rock formations on this part of the beach.
So spent some time looking over them.
It was a good ride as the sun shone and it was rather like a Summers day, rather than a winter one.

Posted by The itinerant archer at 17:45 No comments: 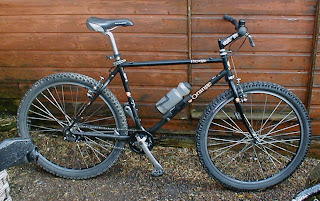 The Bike has now been converted to singlespeed so no more worrying about gears.
It has now turn very cold so the cycling has been put on hold. It's been a good week, imagine this picture with Snow on the hills, dark clouds and rain.
A Friend phoned to tell me he had slid into the ditch on this road and asked me to help him get out.
(If you look in the centre of the picture you can see the part of the road he came off)
It came out with no damage so it was a good ending, but it was a bit of an adventure.
The only thing that broke were the rubber exhaust mountings on my car, they split with age and I had to lay under the car in the rain to fix the problem so I could get home.
They could have done it in a better place, I fixed it properly when i got home.

My car went in for it's Mot (Yearly check) One brake hose, 2 rear tyres, I suppose it could have been worse.
Most of the problems are caused by lack of use.

Still sorting the parts out for the new bike!! still trying to finalise which frame to use.
Posted by The itinerant archer at 18:01 No comments: 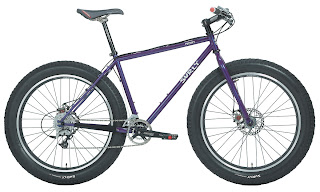 The Sun is shining but it's still cold.

Just built up another bike as a singlespeed, it turned out the wheels would not convert to singlespeed as the hub is Suntour MD with a screw on cog.
But I had a set of wheels that converted easily so they went on instead, chainrings came off easily and the secondhand Dmr Bashguard I got from the Retrobike Forum fitted straight on.
It's nowa simple 32x16 singlespeed setup .
The biggest job was changing the tyres and the chain tensioner fitted perfectly with very little slack on the chain even without it.
Posted by The itinerant archer at 11:02 No comments:

One of those days

Well, I seem to have done nothing put pay out money today, even then I forgot to order half the stuff I wanted !!!!!!!!!!!!!!
But at least I will have one complete bicycle with all the right parts .

It's been warmer today and the wind stayed away till 5.00pm so it was a good day weatherwise.

I have decided to completely build and finish the new bicycle before sending for the Epic Bag System I want to fit on it, just incase I change my mind which bike I am building.
but it seems the best bag system around, I'm surprised no one thought of it before.
Posted by The itinerant archer at 18:38 No comments: 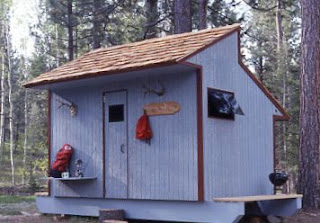 I seem to have missed a day, I thought it was Tuesday today not Wednesday.
More Bike parts arrived today so the new bike is getting closer to reality.

Now planning the new Workshop, this was planned last year but shelved when other things needed doing .
It's sectional so it can be moved if needed, I'm planning a wood burning Stove or some other form of heating, but as there is a lot of old wood lying around I think the woodburner could be in first place.
Posted by The itinerant archer at 18:37 No comments:

A Monument to Greed 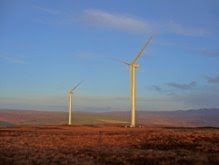 A Monument to Greed, this is happening all over the Highlands of Scotland.
where I live they are building another Windfarm next to this one another blot on the landscape.
Are these a viable alternative scource of energy ??
It has been proved they cost more to construct than the amount of electricity they ever produce.
How much pollution is caused by their construction ??
Posted by The itinerant archer at 18:04 No comments: 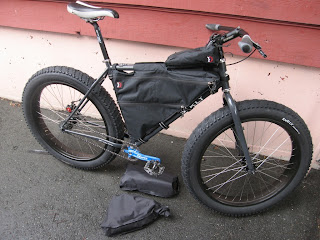 It's been a cold and wet day today.
I have now made a list of bike parts I need .
I have just got a 34 tooth chainring and maybe a bashguard and I seem to have more parts already than I thought I had .
It's parts like the disc brakes, frame, wheels and tyres which I will have to buy special.
I have just about got all the parts planned and sourced
It would be easier to put together a 26" wheel bike as I have more parts for those, but I prefer riding 29" (700c)
I have a 21 speed Dutch bike with 700c wheels (29") which rolls over the ground easily compared to my 26" wheel mountain bike, .
So the search goes on and decisions are being made even if they are being made slowly.

The picture above is of a Surly Pugsley, mine will look much the same but with narrower wheels as they would be overkill for the type of riding I do.
The Bags are from Epic Designs and are made by Eric Parsons checkout his Blog to see more details
Posted by The itinerant archer at 18:42 No comments: 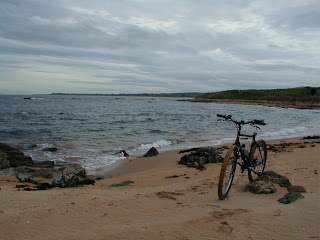 Have now started to get together parts for the new Bike I am building.
I will buy the fancy parts when I know exactly what I am looking for things like the handlebar stem ??? (what length will be the correct one for me??)
So it's build it cheap, ride it, then perfect it .
So far I have the crank arms and the handlebar stem( Ebay)
I have decided that when it gets transformed in its final build I can build another bike with the leftover parts.
The frame will be a Surly karate monkey as it means I get 29" wheels plus I can run gears or singlespeed.
It was going to be a Surly 1x1 but that would mean singlespeed only.

Above is a picture from todays ride along the beach.
Posted by The itinerant archer at 19:32 No comments: